Computer network projects is a collection of computer connected with each other for data transferring, sharing data. Computer network is the peripheral of system. New cross layer and topology can be built with routing protocols. Both with wired and wireless network computers can be interconnected with other devices.  Computer networking refers to the communication between a PC and its components. Projects on this area may be based on internet and networking. Projects on applications like instant messaging, email, video buffering can be done. Certain protocols are needed to perform application related project. The popular instant chatting app like Skype is developed by IP addressing and network. Computer network projects are mainly used for social networking.

Arrangement of computers to create a network is called topology. Both logical and physical components are considered by topology in computer network projects.

Point To Point Topology: It has two hosts which can be a computer, routers or server. The devices are connected by a single cable. The host can either be a sender or receiver.

Tree Topology: Tree topology otherwise known as hierarchical topology can divide the network into many layers. The top most layers become the central layer and it acts as the root of the tree of networks.

Mesh Topology: A single host is linked to multiple topologies. It is created by point to point connection. Full mesh and partially meshes are two types of mesh topology. 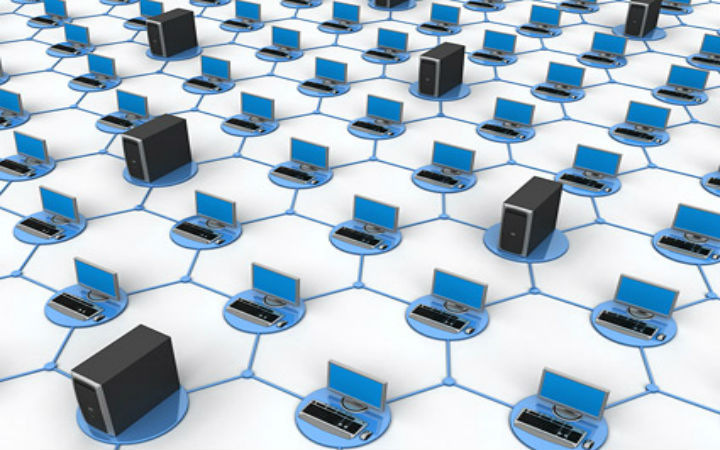 Ring Topology: As the name suggests the connection is formed in a ring manner. Each host can connect to two other hosts. Direct communication is possible when two adjacent nodes are paired. If a single node fails the whole network in ring fails.

Bus Topology: A single cable can be used to transmit the devices of bus topology. Problem of system crashing may occur while transmitting multiple data through a single cable. These problems can be overcome through collision detection (CD) Or Carrier Sense Multiple Access (CSMA).

Star Topology: The hosts are connected to a single central device. This central device is popularly known as hub. So if the hub fails that leads to whole system failure. But the configuration is very simple.

Email Application:A service which acts as client server network. It serves the clients and their needs. There are two types of email client server

They are different servers as they have different protocols. Transmission servers such as POP 3 and simple mail transfer protocol, spreads mails are sent through SMTP server. Before transfer email should be encoded into SMTP format. Then post office protocol is used to get mail from mailbox. Later mail is accessed through internet message access protocol.

Multicast Style: It is used to send video to a group of users. IP multicast supporting router and protocols are used in this style.

Multicast Gateway: It has the ability to transfer videos. They are for users who have enough bandwidth but no multicast.

Instant Messaging: It is a text based messaging that happens via internet between two people. This communication is more effective. More than one person can chat at the same time. LAN is used to create instant messaging. We offer projects on using peer to peer architecture to make instant messaging.

Unicast: Only single user communication is possible in unicast. It doesn’t need any high bandwidth.

Any data in networking is transmitted through a physical medium, so the data to be sent should be converted into electromagnetic radio signals in computer network projects. This data can be either an analog like voice, audio or video or digital signals like files, documents on the disk.

Digital Signals: Digital signals are represented through voltage pulses as they are very discrete. They can also be verified and used within a circuit of computers.

Analog Signals: Analog signals are nothing but continuous waveforms. They are usually denoted by continuous electro magnetic waves.

Disturbance in Data Transmission: During the transmission of data as signal there may be some disturbance which leads to the loss of data packets in network.

Dispersion: Dispersion of signals is nothing but the overlapping or wide spreading of signals when they travel through media.

Delay Distortion: When a signal is transmitted it takes some speed and frequency to reach the media.

Noise: Disturbances caused in the transmission of digital and analog signals are known as noise. This noise may affect original information carried.

Transmission media is the exchange of information over media through computer system. It is categorized into two types in computer network projects. They are:

Unguided Media: Media which unguided such as wireless can be called unguided as they do not have any fixed structure for connectivity.

Guided Media: Media which communicate through wires and cables are guided media. They are called so because they have fixed structure to transmit data.

Ethernet in Computer Networks: Ethernet aids in communication for local computer connections and stations by carrying digital data packets to them. It is also a medium of broadcast. It is recognized by packet address recognition method.

100 Base T: 100 base t enables fast internet access. It maximizes the speed of transmission up to 100 megabits per second. This can be used for local area networks. It will also acquire media access control (MAC) and media independent interface (MII).

10 Base T: 10 base T is the basic Ethernet system which is commonly used. It speeds up to 10 Mbps.

10 Gigabit Ethernet: 10 gigabit Ethernet is the latest Ethernet technology which transmits data at a speed of 10 Gbps. This technology can be used in LAN, WAN and MAN networks. This used as multimedia as well as single mode optical fiber.