Ad Hoc network is multi hop relaying that is the main principle where messages are sent from source to destination by intermediate hops. The first commercial realization of Ad Hoc wireless networking is Bluetooth standard which was developed by Bluetooth special interest group.

A wireless protocol was developed by IEEE 802.11 protocols but do not work out much in multi hop networks. 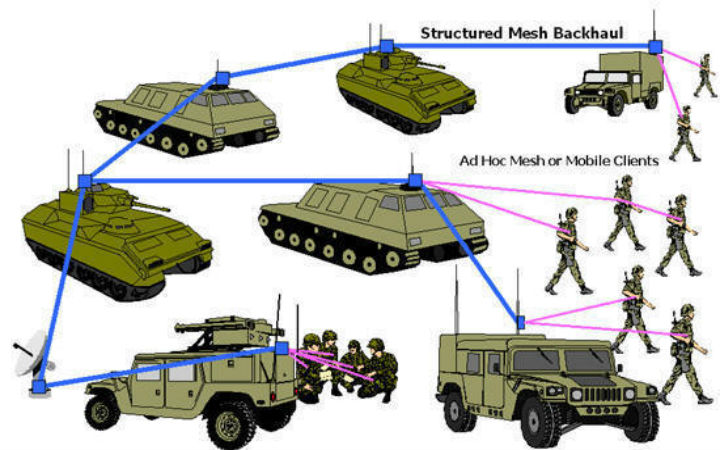 A special type of Ad hoc networks is wireless sensor networks provide wireless communication infrastructure among sensors. A group of large number of sensor nodes is known as sensor network and it is deployed in a specified region.

In Ad hoc networks a group of data in conference share data. Audio or video based may be the conference.

In battlefield environment communication could be established by Ad hoc network.

Search and rescue control could be performed. It is useful in disaster environments.

Transmission among base station or multihop of nodes are allowed in hybrid wireless networks conventional cellular technology with Ad Hoc relay station are combined in a integrated cellular Ad Hoc network.

For routing and data transmission, distributed operation is needed for media access control in wireless Ad Hoc network. Synchronization process in mobile nodes is carried out by time division multiple access scheme. Hidden terminal functionality is possessed by most of the nodes. Real time traffic support for video, voice and real time data transfer is supported by MAC protocol. Directional antennas are used in MAC to increase, spectrum availability to reduce power consumption and interference.

Routing issues: Two types of routing are there in Ad Hoc network

Unicast routing issues: Due to various factors, in unicast, issues arise.Factors which affect routing processes are:

Multicast routing issues: A process of transferring data where data could be transferred among single source node and multiple destination node is multicast. For video and audio conference in a network, multicast functionality is useful. The following factors affect multicast routing

Ad Hoc project are carried out to solve the challenges faced in Ad Hoc network and to improve its quality of service. In upcoming generation Ad Hoc networks plays an active part.

Explaining an abstracted structure of a network is clustering multilevel hierarchy is got when clustering is applied. Grouping of similar objects is referred as clustering. The divided groups of nodes are cluster.The 3 types of nodes in clustering network is

Cluster head: Cluster head is selected by each cluster by one specified node. In a specified network group cluster head acts as local controller. It controls all transmissions among a cluster. Packet deliver functionality and inter cluster traffic is handled. When contrasted to normal nodes more energy consumption is required.

Phases of cluster formation: Metric like, nodes mobility, bandwidth, residual energy and address of node based on these cluster head could be selected. Cluster size depends on transmission range of nodes in a single hop cluster. Communication is possible in cluster member with cluster head for data transmission to next hop. Two or more cluster head connection within a network in possible by gateway node. For Ad Hoc network, gateway node and cluster head act as backbone.